Sunday saw one of TV's most anticipated premiers of all time hit our screens. Breaking Bad season 5 part 2 kicked off to an audience twice the size as it was just 8 episodes ago. I admit I feared it couldn't live up to the hype but I should have known better than to doubt Vince Gilligan. As the Final credits rolled I realised I hadn't taken a breath in about a minute.

From revisitIng the flash forward to Badger's Star Trek fanscript to the confrontation, Sunday night's episode was the usual mix of nail-biting suspense, great comic relief and flawless dialogue that we've come to expect from breaking bad.

The episode kicked off by taking us back to the future, returning to the day of Walter's 52nd birthday. He arrives at his family home now abandoned and seized by the state. Various vandals and squatters have left the house in a state of decay possibly referring back to the Ozymandias poem used in the promo for this season about a king of kings who saw his kingdom crumble. A neighbour sees him and drops her bag of shopping in shock. He walks inside to see HEISENBERG spray painted in large yellow letters across his living room wall. The implication perhaps that Walter has become some kind of local legend like a New Mexican Pablo Escobar.

Breaking Bad has always make great use of musIc montages  and this episode had one of the best yet. We see Hank go through all the files for the Heisenberg case laying down photo after photo on the table. An excellent device that gave us a visual timeline of five seasons of television in about a minute and a half.

Breaking Bad's greatest strength is that not a second of footage nor line of dialogue is ever wasted. Even the most seemIngly insignificant of details can be called back or foreshadow huge events later to come. Take Badgers's star Trek babble for example. While we all got a kick out of the scruffy stoner rambling about science fiction. I had an inkling there was more to it. I'm by know means clever enough to figure it out myself but the good folks over on reddits breaking bad forum had an excellent discussion on it. A less cerebral link between the two series however is the implications of colours. A common staple of Star Trek was the use of the "red shirts", a phrase that's made it into the pop culture lexicon. Characters wearIng red shirts where there just to be killed in that episode. Hard core fans and the observant amongst us are likely aware of breaking bad's fantastic and significant use of the colour spectrum. The implications of various colours are debated on blogs and fan forums often. Red and yellow are thought to imply death is imminent. Of course this could be a coincidence but Breaking Bad generally isn't big on coincidence.

Of course the highlight of last night's episode was the confrontation between Hank and Walt. while lesser series might've dragged out a game of cat and mouse for weeks, Breaking Bad didn't get past the first episode and went in exhilarating fashion  from Hank knows to Walt knows Hank knows to Hank knows Walt knows he knows in all of 10 minutes. The fun in that final scene was in trying to guess what was running through the heads of the two brothers in law. And credit due to Dean NorrIs who made it easy by turnIng In an IncredIble percormance, saying more with his eyes than many actors can with theIr mouths.

Vince Gilligan has spent the last sIx years carefully weaving together elements of pop culture, ShakespearIan and classic literature, art, poetry and music to produce something ironically extremally original and undoubtedly one of if not the most compelling things on television. It's going to be a long week til next Sunday but at least we don't have to wait a  year for Hank to finish up in the bathroom again. 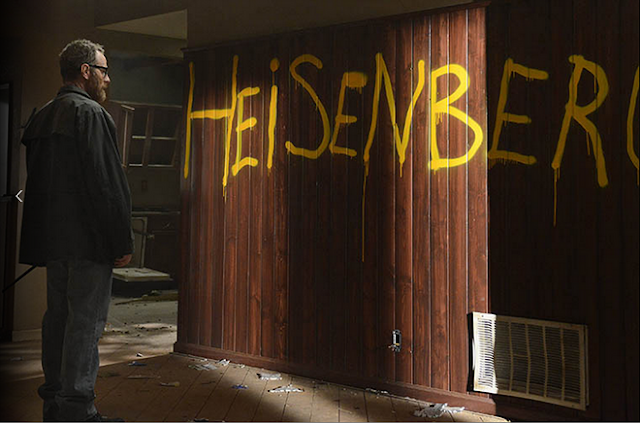 Who's Reading The Blog